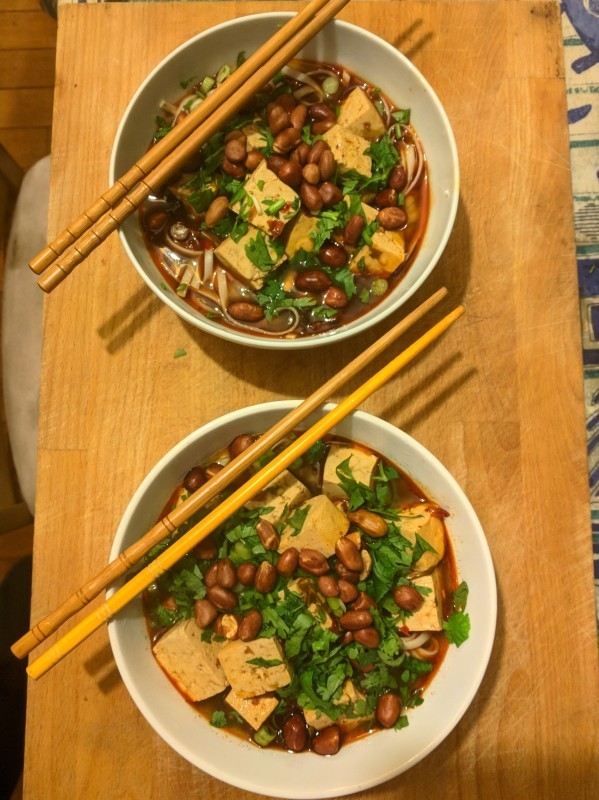 … To go to the Chinese supermarket. And get…

When you get home, drain and press the tofu then put it in the freezer. You can always skip this step, but I think the ice crystals create cavities that make the tofu absorb more flavour when you cook.

If you bought the raw peanuts, put them in a baking dish and roast them in the oven. I’ve always done this in a low heat for two or three hours, but some people on the internet seem to think you can just blast them for 20 minutes, so it probably doesn’t matter.

Anyway, the important thing is for the skins to take on a darker red colour. It gives them a bitter flavour that goes really well with the aggressively salty, acidic broth. For this reason I think it’s actually better to burn the peanuts slightly than to under-roast them. Be gentle while stirring them, you don’t want to lose the skin.

First, boil the tofu gently for 5 minutes or so in salted water (if you froze it, this is when it defrosts). Strain it, then try to press out as much water as possible. Now chop it into roughly 2-3cm cubes.

Chop up the garlic and fry it briefly in some sesame oil in a pot.

Now it’s basically just a matter of putting everything in the pot and heating it up. Here’s a very rough guideline for quantities for 5 or 6 portions:

Add the tofu and bring to the boil. It just needs to cook long enough for the tofu to absorb the flavour, 15 minutes is fine. Once it’s underway you can start cooking the noodles. 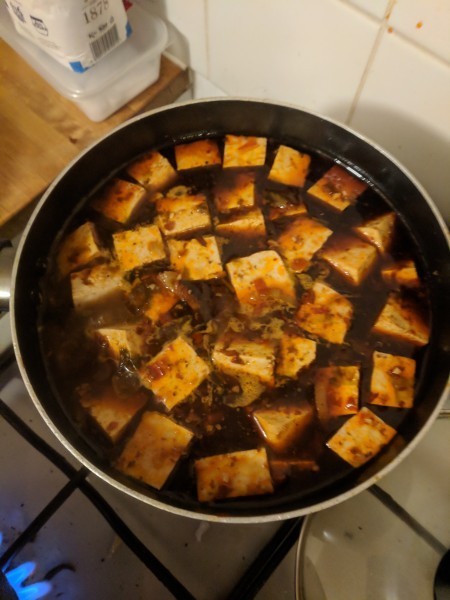 Chop up loads of coriander and one spring onion per person.

Once it’s all cooked, put each portion of noodles in a bowl, and ladle the broth & tofu over the top. Throw some coriander, spring onions, and optionally peanuts or sesame seeds on top. Grind some black pepper on top too if you feel like it. Put the vinegar on the table so people can add more to their bowl if they want. Yum.

I also haven’t tried adding other spices. I bet star anise would go well. If you wanted to get freaky you could try adding a few cloves. I dunno. Edit: star anise is indeed great. One and a half stars seems to be about the right amount for the quantities above.